Recycled Made Into Supercool

Recycled Made Into Supercool

We’ve all been there at one time or another, it’s not exactly broken, but I just don’t know what to do with it. So, throwing it away seems like the most hassle free option. Nowadays, dumpster diving has become a thing. People are making thousands from their diving hobby. Some people even do dumpster diving as a full-time profession. There are many interesting and sometimes profitable items to be found in your neighbor’s trash. And, even if not a lucrative gain, there are unique treasures to be found that can become a special keepsake. As they say, “one man’s trash is another man’s treasure.”

One of Extreme Community Makeover’s volunteers was faced with this dilemma. Brianne is on the Supplies Team and is accustomed to paying attention to what tools and items are needed to finish a project. Her radar was up when she struck a conversation with a resident unloading trash into a dumpster. The resident explained she wanted to keep the pallets she was putting into the trash and even pondered doing a project with them, but she just did not have the time. Brianne jumped at the opportunity and decided to take on the challenge. In her mind’s eye, these left over pallets would become a supercool bench, once they were rescued from the dumpster.

With Google, all things are possible. Brianne googled a tutorial on how to make a pallet bench and got working. Pulling the pallets apart she kept the best pieces, pulled out the nails, sanded them, cut to the desired size and nailed them together. She then found some left over spray paint for the top and white-washed the bottom. And, if that was not resourceful enough, Brianne even borrowed the necessary tools for her pallet bench project from the Denver Tool Library. 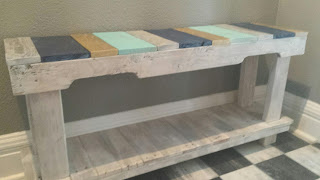 “I’ve been volunteering a lot on the ECM Work Days. So, I’ve gotten better at doing different projects. I definitely would not think I’d have the skills to do this project. However, I decided to give this a try and I found out I’m more crafty than I thought I was,” says Brianne. She is very happy with her recycled pallet bench. It makes a nice addition to her home’s entry hallway on the way to the back courtyard. Brianne now has a story behind this great piece of furniture that she created.
Sometimes all it takes is a little incentive and a little effort to create a masterpiece and in return you help your neighborhood and the planet become greener. So, keep a lookout for your next supercool recycling project!

Councilwoman Jamie Torres: The Neighborhood Where It All Began